Proven methods and tips for weeding your garden

If you were to track every hour spent in your garden, you would probably find that you do an inordinate amount of weeding. And while the first few weeks of tearing up these intruders can prove mildly satisfying, the chore soon wears thin. Even more maddening—you are just six simple strategies away from your garden not needing weeds anymore.

What’s that? A garden needs weeds? Weeds are nature’s healing remedy for sites that are in a wounded, plantless state, but weeds and gardeners have different ideas of what makes for a good recovery. Armed with a better understanding of weeds and the strategies outlined here, you can win every future skirmish, giving you more time to enjoy your well-groomed garden.

Every square inch of your garden contains weed seeds, but only those in the top inch or two of soil get enough light to trigger germination. Digging and cultivating brings hidden weed seeds to the surface, so assume weed seeds are there ready to erupt, like ants from an upset anthill, every time you open a patch of ground. Dig only when you need to and immediately salve the disturbed spot with plants or mulch.

In lawns, minimize soil disturbance by using a sharp knife with a narrow blade to slice through the roots of dandelions and other lawn weeds to sever their feed source rather than digging them out. Keep in mind that weed seeds can remain dormant for a long, long time.

Mulch benefits plants by keeping the soil cool and moist and depriving weeds of light. Organic mulches, in particular, can actually host crickets and carabid beetles, which seek out and devour thousands of weed seeds.

Some light passes through chunky mulches, and often you will discover—too late—that the mulch you used was laced with weed seeds. It’s important to replenish the mulch as needed to keep it about 2 inches deep (more than 3 inches deep can deprive soil of oxygen). In any case, you can set weeds way back by covering the soil’s surface with a light-blocking sheet of cardboard, newspaper, or biode­gradable fabric and then spreading prettier mulch over it.

If you choose to use this method on seldom-dug areas, such as the root zones of shrubs and trees, opt for tough landscape fabric for the light-blocking bottom sheet. There is a catch, however: As soon as enough organic matter accumulates on the landscape fabric, weed seeds dropped by birds or carried in on the wind will start to grow. For the bottom layer of fabric to be effective, these must be pulled before they sink their roots through and into the ground.

The old saying “Pull when wet; hoe when dry” is wise advice when facing down weeds. After a drenching rain, stage a rewarding weeding session by equipping yourself with gloves, a sitting pad, and a trug or tarp for collecting the corpses. As you head out the door, slip an old table fork into your back pocket because there’s nothing better for twisting out tendrils of henbit or chickweed. When going after bigger thugs, use a fishtail weeder to pry up taprooted weeds, like dandelion or dock.

Under dry conditions, weeds sliced off just below the soil line promptly shrivel up and die, especially if your hoe has a sharp edge. In mulched beds, use an old steak knife to sever weeds from their roots, then patch any open spaces left in the mulch.

When you can’t remove weeds, the next best thing is to chop off their heads. With annual weeds, dead­heading buys you a few weeks of time before the weed “seed rain” begins. Cutting back the tops of perennial weeds, like bindweed, reduces reseeding and forces them to use up food reserves and exhaust their supply of root buds, thus limiting their spread. 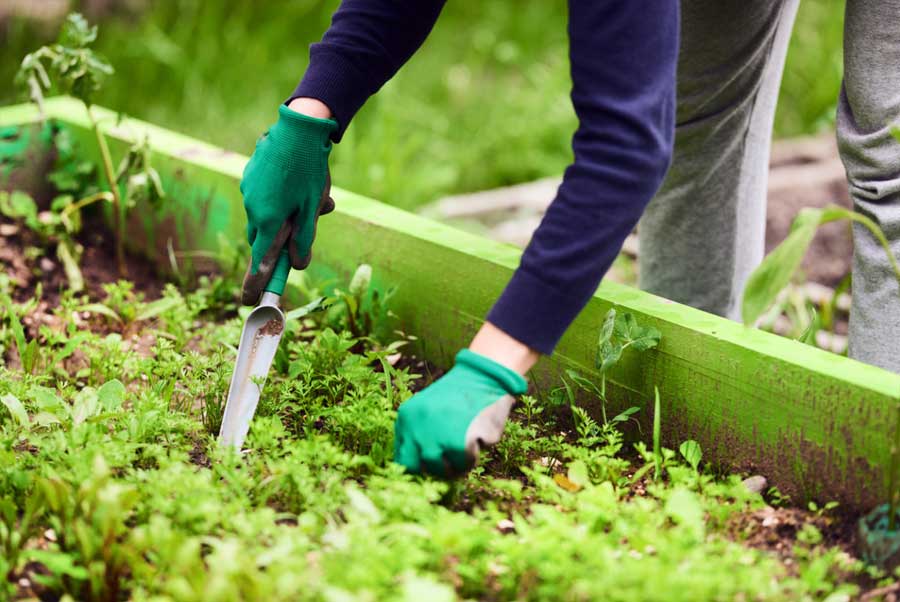 You will need pruning loppers to take down towers of ragweed or poke, or you can step up to a string trimmer equipped with a blade attachment to cut prickly thistles or brambles down to nubs. No matter which method you choose, chopping down weeds before they go to seed will help keep them from spreading.

Close plant spacing chokes out emerging weeds by shading the soil between plants. You can prevent weed-friendly gaps from the get-go by designing with mass plantings or in drifts of closely spaced plants rather than with polka dots of widely scattered ones. You can usually shave off about 25 percent from the recommended spacing.

Most spacing recommendations, however, are based on the assumption that adjoining plants will barely touch when they reach mature size, so stick with the guidelines when working with plants that are prone to foliar diseases, such as bee balms (Monarda didyma and cvs., USDA Hardiness Zones 4–9) and phloxes (Phlox paniculata and cvs., Zones 4–8).

Put drought on your side by depriving weeds of water. Placing drip or soaker hoses beneath mulch efficiently irrigates plants while leaving nearby weeds thirsty. In most climates, depriving weeds of water reduces weed-seed germination by 50 to 70 percent. Watch out, though, for the appearance of deeply rooted perennial weeds, such as bindweed and nutsedge, in areas that are kept moist. They can take off in a flash when given the benefits of drip irrigation.

Beyond these strategies, enriching your soil with organic matter every chance you get can move your garden along down the weed-free path. Soil scientists aren’t sure how it works, but fewer weed seeds germinate in soil that contains fresh infusions of good compost or organic matter. One theory makes elegantly simple sense: When soil is healthy and well fed, weed seeds sense that they are out of a job and are less likely to appear.