The fastest growing flower to start from seeds

If you are a new gardener or are working on a garden project with children, finding flower seeds that grow rapidly is important. The fastest-growing seeds germinate in a matter of days and flower in roughly two months. An important consideration for very young children is seed size, which should be big enough to pick up easily between thumb and finger, such as a nasturtium or sunflower seeds. In contrast, petunia seed is fine as dust.

Some flower seeds, such as zinnias (Zinnia spp.), may germinate a few days after planting. Zinnias average from three to five days. However, that doesn’t mean they are among the fastest-growing flowers, because it can take zinnias 75 to 90 days to flower. Cosmos (Cosmos spp.) is another prime example. Although its seed germinates in seven to 10 days, cosmos doesn’t flower until 90 to 120 days after planting. In contrast, California poppy (Eschscholzia californica) may take about 21 days to germinate in U.S. Department of Agriculture plant hardiness zones 6 to 10, but flowers within 60. The fastest-growing flower seeds are those that germinate in 14 days or less and flower within 70 days. These include marigold (Tagetes spp.), nasturtium (Tropaeolum majus), annual phlox (Phlox drummondii) and sunflowers (Helianthus spp.). Aside from its genetic heritage, the speed of a flower’s growth depends on having its needs met. In the beginning, these conditions include seed planting depth and other germination concerns, such as light, temperature and moisture.

Planting a seed incorrectly can impede or end growth. Some seeds need light to germinate and must be sown on top of their growing medium, whether outdoors in the garden or indoors on seed flats. These include impatiens (Impatiens spp.) and petunias (Petunia spp.). For seeds that need darkness – such as those of calendula (Calendula spp.), phlox and sunflowers – a general rule is to plant at a depth twice the seed’s diameter. For example, large sunflower seeds require planting 1 1/2 to 2 1/2 inches deep. Marigolds, however, germinate whether planted under or on top of soil. Check seed packets for information about planting depth.

Proper germination temperature and moisture also speed initial growth. Temperature requirements vary for the seeds of different plants. For example, the optimum daytime germination temperature for marigolds is 70 degrees Fahrenheit whereas snapdragons (Antirrhinum spp.) like it colder at 65 F. For most flower seeds, the daytime temperature needs to be somewhere between 60 to 80 F, and nighttime temperatures should be 10 to 15 degrees cooler. For indoor seed starting, if you feel comfortable with the temperature in your house, your seeds likely will too. Moisten the soil before planting, because watering immediately after sowing can cause seeds and soil to shift haphazardly. Keep the soil moist but not soggy during germination to avoid rot. 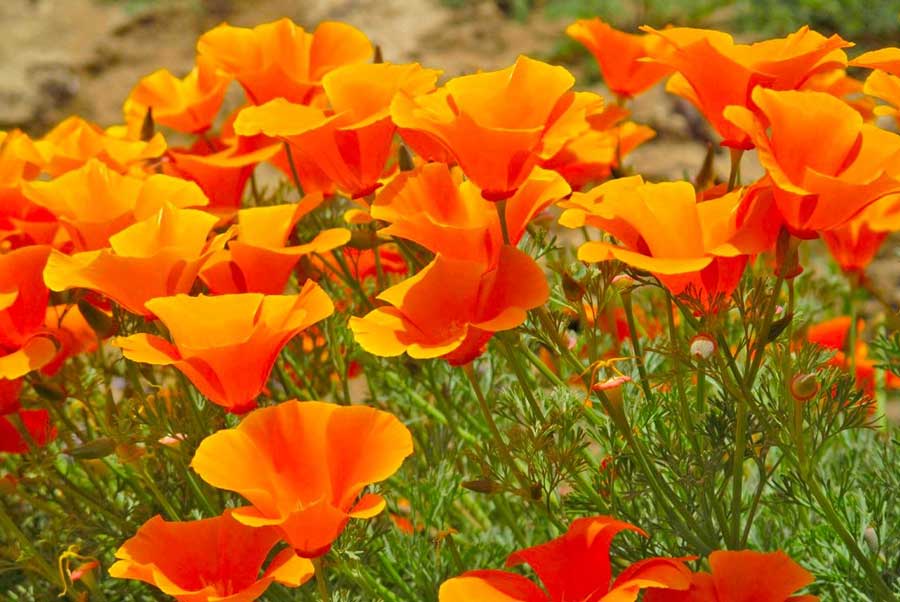 Some plants do better if seeded outdoors. If seeded indoors, transplanting may slow their growth. These plants include cosmos, marigolds, nasturtium, sunflowers and zinnias. The rule for seeding outdoors is to wait until the threat of frost has passed. Flowers that do better when seeded indoors include impatiens and petunias. For seeds planted indoors, the growth time different flowers need before outdoor transplanting varies. Although impatiens may not be ready for transplanting until about eight weeks old, zinnias started indoors will become leggy and root-bound if kept inside that long. Consequently, if starting seeds indoors, you need to time germination based on a transplanting date when the danger of frost will have passed.